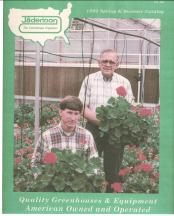 During his high school years, Willis Bruce worked at the insurance company where his father, Quinton Bruce, was vice president. Willis’ job was two-fold : during the week, he worked inside half of the time and outside on the grounds the remainder of the time. His original plan was to one day become an accountant in that same firm. However his desire to work outside surpassed his desire for accounting, and his enjoyment with the family hobby – a greenhouse at home, led him into the field of horticulture.

After Willis’ high school graduation in 1975, his dad retired from the insurance company and moved the family to Blythewood to help Willis get started with his business. They began with a trailer for their office and one greenhouse.

During the first five years they grew a variety of plants and flowers and even sold shrubbery. Now more than forty years later we specialize in a growing a wide variety of potted plants and combination baskets to suit your flower needs!

Would you like to learn more about our quality plants and growing schedule? Give us a call! We're happy to answer any questions you might have.